Play as a resurrected dinosaur in this little game jam game and tear evil scientists to shreds :). (Don't worry, they deserve it)

Game made in haste, so hopefully it's not too buggy hehe.

+ Graphic and sound resources cute and well blended together (except the fanfare of victory in the battle IMHO);

+ Very nice idea, who wouldn't want to impersonate a dinosaur?

+ An excellent balance between the tenderness of the intro and the "realism" of violence in the later stages;

+ The Puzzles are VERY basic, but designed well and with a good use of colors and symbols, they're smart;

+ The balance of the moves in combat is not bad, no move is really useless and also holds up well the fact of having only one hero in the party (which in my opinion also gives greater identification so you have been able to put a positive side in a limitation, well done)!

+ The dialogues are accurate: simple but effective and give the right character to the few characters;

- Mapping is a bit bare: a few more touches would be enough, some objects to interact with, more variety of elements (numerically), even in the battle system, a wall on back, some table or other elements would be nice;

- PC system and menu with some bugs: just put a black picture that covers the whole screen a few moments before the graphic change from raptor/ hero to cursor and vice versa. Same thing for some other map transitions; There is also a bug in the battle system: to the right of the word "Fight" there seems to be another option on which you can go and if you press "Enter" the buzzer of the denied/unselectable action sounds; after the end credits, the final dialogue starts again but on a black screen (!) and cicles again (and again, i guess);

- I was not very convinced by the ending as a justification, I do not spoiler. It seems a bit closed with hurry (maybe it's just like that!) BUT... Dunno. I think it was an "easy way" to close the whole thing;

- The game is very easy, a few more enemies and fewer possibilities of cure, would have helped to make it better IMHO;

OTHER CONSIDERATIONS IF YOU'RE GONNA MAKE AN "EXTENDED" VERSION (This is an invitation, I'D LOVE IT!):

. It would be nice to give the basic mechanics more functions: for example when the raptor runs, if it goes against a cracked glass or a capsule / tank (the green cylindrical ones in short) breaks them and maybe gets objects, exp or other collectibles or bonuses. Or if the object is not fragile, move it by 1 tile as you tackled it, so you can place it on switches, block the way to enemies, push them to a lower floor, use them as a bridge, etc.;

. It is true that we impersonate a dinosaur, intelligent, but still a dinosaur, but some more varied puzzles in the advance of the game would have given a little pepper to the whole;

. The possibility of acquiring a few more moves, not necessarily many, even just 2 or 3 not related to the level-up, perhaps related to finding collectibles or secrets, hidden places, etc. would have been welcome;

. In the "Skills" menu it would be useful to be able to see how many MP consume the moves without having to click on them, but only by passing with the cursor.

Great job considering that it was done (from what I understand, excluding plugins) by a single person.

Personally I WANT MORE. It would be nice a similar game (a spin-off, a continuous, a parallel story...) but more long-lived, even better if with improvements like the ones I recommended :P

P.S.: i'm gonna check out your other projects from now on :)

Halo! I played about half of Resurraptor on stream. I left some points, but please feel free to ignore me, I just thought I’d leave my comments on the vid here too.

This is definitely a great effort within the time frame, but as a game alone it lacks some much-needed snappiness and polish. It just feels very “basic” aside of the cool art now, which can only take it so far.

As it is right now, for the IGMC 2022, I got bored and stopped playing at the midpoint after clearing the second hand-locked door. It’s such a pity because the art is great, but I understand everything takes time and there probably was not a lot that could be done. Cheers! 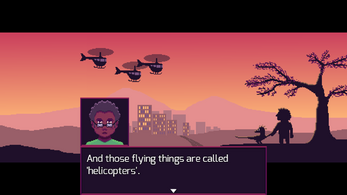 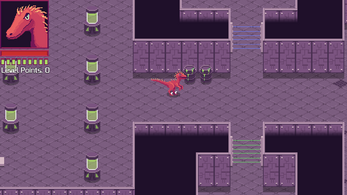 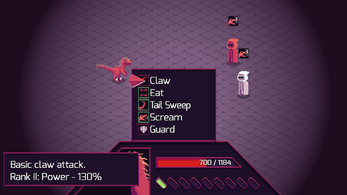 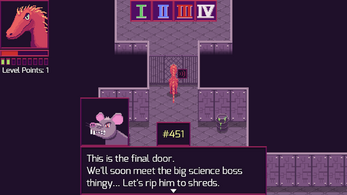